The brothers Jacob and Wilhelm Grimm are counted among the most important personalities of German and European cultural history. They are regarded as founders of German philology and gained international renown with their collection "Children's and Household Tales" ("Kinder- und Hausmärchen"). In 2005 UNESCO declared the personal annotaded copies of the "Children's and Household Tales" world heritage documents.

Jacob Grimm was born in Hanau in 1785, Wilhelm Grimm in 1786. They were six resp. five years old when they moved to Steinau with their parents and three more brothers in 1791. Their father Philipp Wilhelm Grimm, born in Steinau in 1751, had been transferred to his native town. The court house became the family's official residence. It is a stately renaissance structure with a stone base and an upper floor elaborately timbered. The building is embedded in picturesque, large-scale grounds surrounded by walls. The Grimm brothers spent a happy childhood in the court house. In 1793 their sister Charlotte Amalie was born there. Today the former court house is the Museum House of the Brothers Grimm Steinau.

The House of the Brothers Grimm Steinau was founded in 1998 in cooperation between the Magistrate of Steinau and the International Association of the Brothers Grimm. It presents life, work and effect of the Brothers Grimm in a sensual way. Using interactive means guests can see, hear and feel the colourful world of Grimms' Fairy Tales. Both grown-ups and children enjoy looking at old fairy tale editions, brilliant illustrations and numerous fairy-tale figures. The museum rouses childhood memories and makes the fairy tales come alive.

One room of the museum is dedicated to the works of Ludwig Emil Grimm, Jacob's and Wilhelm's younger brother, who was an important painter and graphic artist of Romanticism.

The most pleasurable way for guests to learn about the House of the Brothers Grimm is during a guided tour. Within a space of 600 sq in 19 rooms they hear a lot worth knowing about the life of the Grimm family in Steinau and the works of the world famous brothers.

Museum exhibition guide
Curator Burkhard Kling compiled a guide in two volumes. Both volumes were printed with the support of the Hessian Ministry for Science and Art. Please see here for further information...

Information on guided tours through the museum please find here... 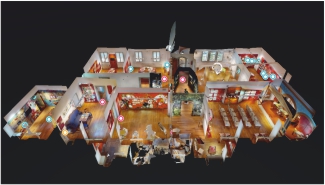 Virtual tour through the House of the Brothers Grimm Steinau